How to Learn Music Theory

Music theory gets a bit of a bad reputation sometimes. A lot of student musicians think of it as dry, uninteresting and irrelevant. The bane of many a music student’s life is the Grade 5 theory exam. If you take ABRSM music grade exams, which most people do, you can’t progress higher than Grade 5 practical if you don’t have Grade 5 theory. The theory exam is concerned with the language of music notation, it makes sure you’re familiar with clefs, time signatures, chords, italian terms and soforth. This is obviously information that you need to know, but once you know it, you can embark on the much more fascinating side of music theory: the analysis of the music itself.

If a great actor were going to play Hamlet on stage, he would not only learn his lines, but also delve deeper into the text to explore subtext, hidden meaning and structure to the work. This will underpin and enliven his performance, and make it utterly individual. As musicians we must do the same and, equipped with our in-depth knowledge of musical language, begin to analyse.

As an example of how you might begin an analysis of a score, let’s use one of the simplest and well-known pieces of music in existence: “Happy Birthday”. I’ve drawn up a very simple version of the piece, in C major, with a basic accompaniment. 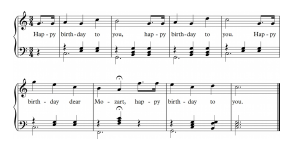 How would you begin to analyse to analyse something like this? You might think it so simple that there’s nothing to say about it! Let’s forget that thought for now and first start to look at the harmony in the piece. The harmony here is very straight-forward: one chord per bar. Firstly, try to identify each chord and its function within the key of the piece, then label the music accordingly. You can either use the names of the chords, or roman numerals. You might end up with something like this:

Once you’ve done this, it’s easier to identify the cadence points. The first phrase of “Happy birthday to you” is accompanied by chords C-G (I-V), and the second phrase by the chords G-C (V-I). So we have an imperfect cadence followed by a perfect one. You then might look at how the melody relates to this harmonic progression. As you can see, the two “Happy Birthday to you” phrases are identical, save for the last two notes, which have been transposed up one step the second time around. A savvy music analyst might make the suggestion here that the second phrase expands upon the first by copying the harmony and the melody from the first phrase, but making two important changes: reversing the two chords and providing a larger, more noticable melodic leap for the ‘to you’. Therefore the second phrase is providing us with something both similar and different from the first: a classic trope of musical development. Listen to the first first eight bars of Mozart’s 40th Symphony; it employs exactly the the same technique!

Let’s take another look at how the melody relates to the harmones. Look at the first “birthday’”and the notes assigned to that word: A-G. The harmony that underpins this is a C major chord, which is comprised of the notes C-E-G. So, what is an A doing in the melody, if it doesn’t fit with the harmony? The A is a non- harmony note, or dissonance, and the technical name for this particular example is an appoggiatura. When we think of the word dissonance, we imagine horrible clashes in music that sound unpleasant to the ear, but in the right context they can be very beautiful and expressive. This is a fairly mild dissonance, and is called a 6-5 because the dissonant note A is a 6th above the root note of the chord (C), and it resolves down by one step to a G, which is a 5th above C. In the next bar, the same notes for ‘birthday’ are this time over a chord with a root of G, so if you do the same maths, this works out as a 9-8.

The melody has been constructed so that the notes can be placed over two different chords, to give the result of ‘dissonance-resolution’ each time! The savvy music analyst might go one step further and suggest that because dissonances give emphasis to musical moments, the word ‘birthday’ is higlighted. This is very appropriate, given that the song is all about birthdays!

Now we’re on a roll with identifying dissonances, let’s look at what’s going on in bar 6.
How does the melody fit with the harmony here? If we use the same process, we can see that it’s another similar dissonance: 4-3 (or B-A over a root of F). This is an extra spicy dissonance because the fourth between B and F isn’t a regular perfect fourth, but an augmented fourth! This is also known as a tritone, the devil’s interval! This gives extra weight to the dissonance, and is the most notable dissonance of the whole piece. Again, you could say that it’s no accident that this coincides with the name of the birthday boy/girl – it puts extra emphasis on their name. The added fermata (pause) at the end of the name contributes to this effect too.

Let’s think about the harmony of the penultimate bar. The notation of C/G signifies that it is a chord of C major, but with a G in the bass. This means that it is a second inversion C major chord. Second inversion tonic chords are often used just before a final perfect cadence like this one. This is because the bass note of (in this case) G can be repeated over the two chords C/G and G7, before finally resolving to a root position tonic of C. A prolonged dominant note in the bass such as this is often used by composers to ramp up excitment and tension before the final cadence. Take a look the last six bars of Bach’s Prelude in F Minor from book one of The Well-Tempered Clavier. All sorts of different chords are being sounded above a sustained dominant note in the bass (this is known as a pedal point). It would be an exaggeration to classify the penultimate bar of Happy Birthday as a dramatic dominant pedal point, but it is a microcosm of this effect. In short, it hammers home the final cadence, and makes it feel more like a finale!

So there you have it: a worked-through example of an analysis of an ostensibly simple piece of music. As you start to unpack it, you often realise that there are subtle complexities waiting to be found. And, believe me, this is true of all great pieces of music, and it is music theory that lead us to this greater understanding. So when you’re irritated by the seemingly useless Grade 5 theory exam, just remember that it’s merely the first step on the road, and it can lead to some very exciting places!