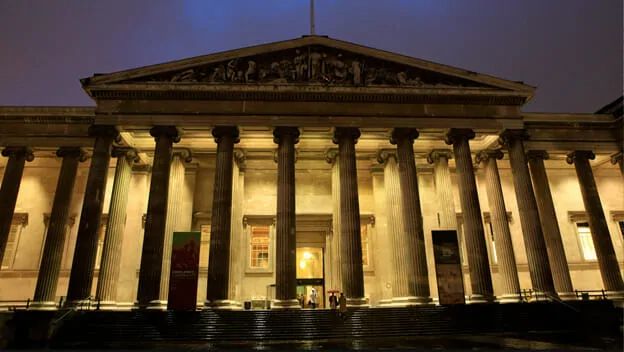 Last week I was in Central London having lunch with a friend of mine and on the way back decided to go for a quick dip into the British Museum. It’s things like that which make living in a capital city so good. Got forty-five minutes to kill? Just go and casually see some preserved human remains from 3,000 years ago, staggeringly intricate Etruscan metal work, delicate (and fairly salacious) Greek pottery and a whole host of other things besides which are a tremendous reminder of the invention, sophistication, brutality and nuance of humanity throughout the ages.

There’s something about the ancient history sections of museums that I find incredibly moving and I can’t quite put my finger on it. Probably the most obvious aspect is that whenever I see some jewellery or stonemasonry from the ancient world it leaves me staggered that it was made by another human being, just like me. Whenever I watch movies I often realise that I am unable to comprehend that it is an actor portraying a part, that I am not actually seeing into the life of John McClane or Holly Golightly or Scott Pilgrim. Now I know that part of that is down to the smoke and mirrors devilry that is acting, but I also get a similar feeling whenever I see ancient artefacts. At the same time as feeling awe at the age of the object and the ingenuity of the human being that created it, I’m also aware that there’s a part of me that strongly suspects it was actually fabricated by the museum. I can’t shake off the erroneous feeling that there is a conspiracy of academics who fake artefacts to look impressive and back up the narrative that Europe was once ruled by the Romans or that Egyptians loved to bury their dead and then write all over the coffin. Obviously, that is what happened, but it seems awfully convenient that it’s also such a good story.

The other thing about ancient history that makes shivers run down my spine is how other-worldly it all seems. The nature of history that old is that it is always going to be mixed up with myth, legend and hearsay, but whenever I read about the history of Lydia, Carthage or Mesopotamia, it’s always a shock for me to find that these places appear on exactly the same map that you’d find in a British Airways flight magazine. I don’t know if that’s the effect of too many Tolkein novels and comic books, but it seems impossible for me to get my head around the fact that Cleopatra and Alexander the Great, Rameses and Octavius and all the other nameless Babylonians, Persians, Hittites and Phrygians actually existed and walked the same dusty earth that I have when I’ve wandered around the Mediterranean in my flip-flops. I don’t think it’s purely a matter of time and place. Obviously I feel a connection to events of the 19th and 20th century. I can wrap my head around the playwrights, natural philosophers, industrialists, chimney-sweeps, farmers, aesthetes and aristocrats of the post-Renaissance age. At a push I’m able to empathise with the medieval world without my brain creaking too much and even the violent, testosterone-pumped reality of the Anglo-Saxons isn’t too much effort to envisage for someone who has shared a changing room with private school boys’ rugby teams. But any further back and my imagination refuses to believe the images it creates (ably aided by textbooks and museum displays.)

I don’t think it’s solely to do with the fact that there is a reassurance of learning history about an age when the date requires four figures or the delineations of nations on the map seem vaguely familiar. After all, if I was lucky enough to pop back in time 2,000-2,5000 years (and find sufficient excuses to mask the overtly curly hair and slightly too large nose) I would find libraries, pubs, stadia, market places, complex music, mathematics and food, as well as people capable of thinking about combustion engines and optics. People who share precisely the same genetic code as every human alive today, but living a life that it’s hard to think of as anything but mythical.

If I did enough digging – probably on a programme called ‘Who Do You Really Really Really Really Really Really Think You Are’ – I’d expect I wouldn’t find the world full of sage old ancients, talking in constantly epic sentences and acting like extras in Game of Thrones. I expect it wouldn’t take long to find moaning shopkeepers, world-weary civil servants, arrogant sportsmen and neurotic actors. I imagine, like any travel in either time or space, I’d find that these strange distant destinations would be eerily similar to the here and now.

The thing that really grasps me about the ancient world, I think, is that it had a feeling of newness about it, an unexplored quality. Don’t mistake this for innocence. People still went to war and tortured each other, still connived and cheated. Hey, the greatest intellectuals of the ancient world loved to have sex with young boys and the greatest mathematicians enjoyed all the courtesans they could afford. But whilst there wasn’t any innocence about early civilisation – I don’t think there has ever been anything innocent about humanity – there was the excitement of the new. It could be that I’m projecting that onto historical people that I know precious little about, but just as when I listen to Elvis or Buddy Holly and can hear the lightning-strike excitement of these men discovering for the first time what you can do with three chords and a decent rhythm section, so the displays of the British Museum show humanity’s invention and excitement at what you can do with bronze, pottery, stone, iron, paper, ink, glass, wood, silicon and everything else the earth has to offer up to us to make our species work. Some people think that museums are boring because all they show is old things and ways of living that we’ve outgrown and no longer need, but I disagree. To me museums vibrate with newness and invention that, even in our current age, we struggle to match. That’s why I find them such a constantly enriching, replenishing and enlightening place to visit.

Gawping at History, was written by a Tavistock Tutor