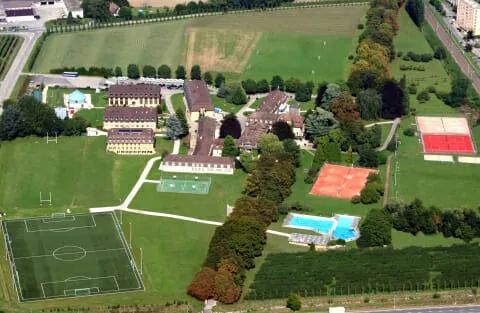 Institut Le Rosey, also known as the “School of Kings” for its royal and distinguished alumni, is the most expensive private school in the world, with an annual tuition (including boarding) of $113,000, according to CNBC.

The Swiss international boarding school, founded in 1880, boasts a reputation for rearing worldly and cultured students on a campus described as a “global village.”

Some of the school’s former students include King Fuad II of Egypt, Julian Casablancas, Prince Albert II of Belgium, and José Ferrer.

Le Rosey is located on two campuses: one in Rolle (beside Lake Geneva) for the spring session and the other in Gstaad (a picturesque ski village) for the winter.

The school uses a bilingual curriculum where students learn in English and in French—and more languages if they wish.

All 380 of Le Rosey’s students live in the boarding houses at the school’s pristine campuses.

The students at Le Rosey are privileged, and the school doesn’t hide this; students are encouraged to explore creativity, go on trips, and discover their own culture.

Sports offered at the school include, but are not limited to, horse-riding and badminton for the first term; skiing and snowboarding for the second term (in Gstaad); and tennis and dance for the third term.

Along with a regular regimen of classroom learning, students take weekend art and theatre trips across Europe, to Spain, Britain, Italy, Germany, and other destinations.

Mid-October excursions give Le Rosey students the chance to explore new cultures; some have taken humanitarian trips to Africa and India, while others have traveled to the desert to see what life is like there.

Le Rosey prides itself on the tight-knit, global circuit of students it has produced; thousands of alumni have joined The International Association of Former Roseans.

Read more on the Business Insider.