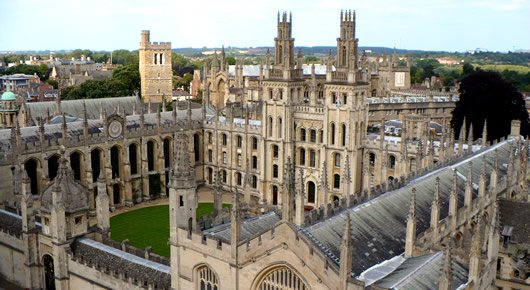 From Formal Hall to the Boat Race, from graduation ceremonies conducted in Latin to the Time Ceremony – an annual event in which students from Merton College walk backwards around a quad drinking port in order (supposedly) to repair the damage to the spacetime continuum caused by the clocks going back – Oxford loves its traditions. As an institution, it is extremely proud of its long history and its famous alumni, and Oxford tutors and students alike enjoy treading paths and taking part in rituals that extend back through the centuries. In one respect, however, Oxford is certainly not traditional: in its choice of students. Tutors at Oxford look for students with diverse, original minds, who are receptive to new ideas, and who can participate in an intellectually stimulating discussion. If you have decided that you would like to apply to study English at Oxford (and I congratulate you on your excellent taste if you have), I have one essential piece of advice for you: do not try to conform to your idea of what an Oxford student is. Forget all the stereotypes of foppish, champagne-drinking, caviar-guzzling youths drawn from Brideshead Revisited. Oxford tutors will not be impressed if you come to your interview as Sebastian Flyte; it would be far better to come as yourself. If you have chosen to study English you presumably have a passion for reading and an aptitude for expressing your ideas about literature. It may sound absurdly simple, but this really is all that your interviewers will be looking for. At my own interview I was astounded by how much of the discussion was centred around which particular texts I had read. Show evidence of extensive reading, and tutors will undoubtedly be impressed.

As you probably already know, a large proportion of the teaching at Oxford takes the form of tutorials: meetings between a tutor and a small group of students (usually one, two or three) in which the tutor goes through the students’ essays and attempts to extend their ideas about the topic they have been studying that week. The tutorials are focused towards developing the thoughts expressed in these essays into a more sophisticated argument. Interviews at Oxford are basically simplified versions of these tutorials. Your interviewers will take the ideas you express (either in your Personal Statement or in the interview itself) as a starting point for a discussion, and try to encourage you to form more complex theories based on those ideas. It is therefore a good idea to enter the interviews with a couple of points to make about each of the writers or texts you have mentioned in your Personal Statement. At the same time, you must be prepared to follow the flow of discussion within the interview. Do not stick rigidly to your original opinions; be prepared to adapt your ideas in light of what the interviewer says. Similarly, if you are given a piece of text to read in preparation for a discussion in the interview, it is a good idea to clarify in your own mind what effects you think the writer is intending to make (based, preferably, upon a close analysis of the writer’s use of imagery, choice of language, or upon aspects of the text’s form such as alliteration, rhyme and metre), but also to be receptive to the tutor’s own reading of the text. That common mantra of teachers, ‘There are no right or wrong answers in English’, should not be taken as an excuse to cling blindly to your own opinion; after all, the whole purpose of a degree is to learn something, and in English the most important kind of learning involves opening one’s mind to the ideas of others. Tutors want to see that you have the kind of receptive, intellectually curious mind that it is a pleasure to teach.

A common misconception about Oxbridge interviews (propounded, for example, in Alan Bennett’s play The History Boys) is that you should express opinions that are as controversial as possible. While you should by all means try to be original, do not expect an interviewer to be impressed if you spend the entire interview discussing the profound meanings to be found in the Twilight series. The Oxford English course takes the English literary canon as its foundation, and so you are far more likely to impress tutors if you can show an existing familiarity with the canon, and, if possible, find an original angle on canonical texts. It is likely that some of your interviewers will be specialists in Medieval or Renaissance literature. While they are aware that most candidates’ knowledge of literature from before 1700 is limited to Shakespeare, they will be favourably impressed if you have read, and can make a couple of points about, a few of the Canterbury Tales, Beowulf, or plays by contemporaries of Shakespeare such as Christopher Marlowe or Thomas Middleton.

More important than demonstrating what you have read, however, is showing that you possess what Oscar Wilde described as the ‘Oxford temper’: the ability to ‘play gracefully with ideas’. Aside from a passion for literature, the main quality that Oxford interviewers look for is an enthusiasm for expressing your own ideas and a receptivity to the ideas of others. If you can demonstrate this quality, there is no reason why you should not eventually find yourself stumbling backwards around quads with the best of them.