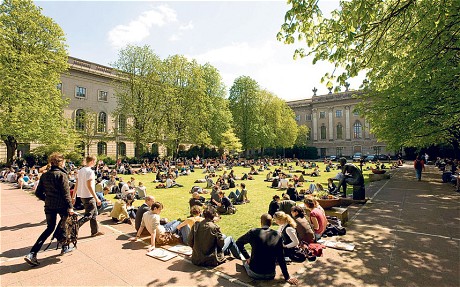 In a sleepy square near Euston there is a gathering of students, relaxed, bright-eyed, optimistic; beyond the shrubbery there is noise, and cars and talking: this is the sunny day in June spent at an open day. You may even have Ted Hughes Collected Poems floating about in your bag. No doubt, the lecture theatre you and your companion(s) piled into met your specifications, and the head of department sparkled in a speech that sold you this course. Better still: your life. From now on, Literary Criticism is your vocation, and your gaze is sharp to symbols and motifs. The train ride back home becomes, in itself, a poem.

On seeing a university for the first time, it is difficult to not to take the aesthetics of the place as the guiding light. After all, there is a reason that open days are held in early summer; the campuses receive a face-lift, and the students mill in the sun –otherwise they would have to be paid.

You can see yourself at this university, you can imagine walking briskly through an autumnal scene straight out of a film. There is a seminar at two and you are five minutes away, the book in your hand heavy with notes. It may seem obvious, but it is worth spending a minute contemplating what this book is.

In my first year, we were treated to (read: ‘subjected to’ if it is not your thing) two hours a week of Middle and Old English. In first term, Malory, Chaucer, and Gawain were on the menu; second term revealed Beowulf, The Wife’s Lament, and The Dream of the Rood. All of these texts or writers were valuable and illuminating; but the most surprising element of the first seminars was the students’ incredulity at having to read these texts.

On a certain level, prospective students view a degree in English in a similar way to employers: from Sussex to Edinburgh, students of English will have covered the same canon. To further complicate this discussion, English suffers and benefits from the idea of the canon in equal measure. Students read Austen, Hardy, Shakespeare, Conrad, Woolf, Joyce, and Kerouac; people think this all well and good and get on with their lives. But the canon is as fluid as the research interests and targets ranging from department to department. Some emphasise the performative, with poetry and drama; others are more theoretical in the application of post-colonial, feminist, or materialist thought to the novel. Others are historical, borrowing the toolbox of the historian when going to work on literature as a broader definition of any influential text. In a pile of prospectuses promising passionate teachers and bespoke courses, the task of the student looking to find what is best for them is nearly impossible.

If there is one piece of advice often given, but seldom followed, it is to read the titles that don’t look so exciting. If on the lists of first year texts there is The Waste Land, flanked by Paradise Lost and The Life and Opinions of Tristram Shandy, Gentleman, read the last two. Eliot will no doubt be snugly brooding in your personal statement; Sterne, author of Shandy, will be sitting in the dark. Though specialisation in penultimate and final years of the undergraduate degree will shed the texts you don’t want to read, the first year modules/courses need to ground you; first year gives you a sense of what English Literature is. Even within the most passionately penned essay of your degree, there will be duller moments of research, comparatively speaking. The requirement of these texts stems from their twofold purpose. Reading Tristram Shandy allows you to decide what you like –you may enjoy it; many people do–, and contributes to the sense of period necessary to a literary scholar. Shandy may not be your cup of tea, but the Romantics might; Blake, Wordsworth, and Coleridge shared the 18th Century with Sterne, and their differences will be interesting. Similarly, but following the modernist strand, Ulysses may have fascinated you, and Joyce was fascinated by Sterne’s maddening fragmentation.

I am not arguing against an aesthetic judgment, my emphasis is on understanding the task which will occupy most of your time for the next three years: reading. At whichever university you choose to study, you will spend a lot of time reading for seminars, tutorials, and essays. It is a discipline which requires you to be agile and multi-faceted. In English language and literature there is religion, philosophy, politics, science, war, history, anthropology, linguistics, and the classics, all influencing, all important. The study of literature encourages a cautiousness that comes with understanding the smallness of your knowledge, and the ways in which you may amplify it.

The key to English, ultimately, is originality. Ironically, the further back you are willing to read (pre-1900, excluding Shakespeare) the more original you will appear both at application and in study. This will make you stand out to any department whether they emphasise this or not. If you are still excited about a degree in English when reading difficult texts as well as those you have read outside the classroom, and are interested in applying a critical eye to both, the English is for you.