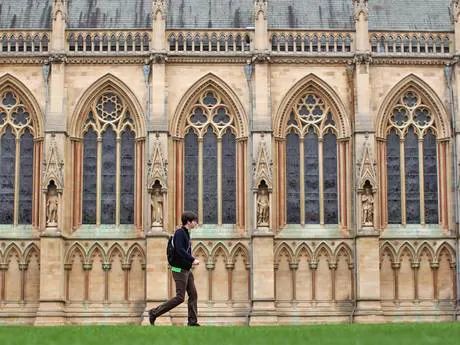 Honestly speaking, I had failed my cambridge admissions exam and did not have their minimum requirement of an a* at A-Level. I applied anyway;

Regardless of what you’re applying for, try to write about an area or topic in your field, which is uncommon. Alternatively, if you’re passionate about a popular area in your field, try to  explore it from a different angle. For example, don’t apply for English literature using Shakespeare’s ‘Othello,’which is a text studied for A level coursework across England. If you decide to, ensure you have a strong argument/ point/ idea to make, which demonstrate original thinking.

It is also essential that your personal statement flows and has some sort of chronological structure which links your ideas… you don’t want to jump from talking about a lab experiment, to then saying that you play tennis as a sport. Try to cleverly intervene the two; for example, you can link labs to biology, health, muscles and then sport. It’s very important that your personal statement doesn’t sound as if you’re frantically jumping from one thing to another… make it a pleasure to read! This way,  you’ll have the admin tutor’s attention thus you’ll be unforgettable! Lastly, try to reference as many books, documentaries, articles etc, as you can, to really strengthen your ideas about a topic by providing evidence for it. This will show that you’ve put a lot of thought and effort into why, for example, you would like to study civil engineering as opposed to mechanical engineering. Making a comment like ‘I prefer to work in a social environment’ is very vague and shows lack of research on your behalf.  Try to embed scientific and textual references in your sentences.

Language comes so naturally to us that it is easy to forget what a strange and miraculous gift it is, and I hope to embrace this distinct quality, which differentiates us from any other species, through the study of Linguistics at university. Knowing Arabic, Latin and Hungarian gives me a unique perspective on how writers use language as a powerful tool, and an understanding of how subtle meanings can be lost in translation.

Sandor Marai’s ‘Ester’s Inheritance’ in the original Hungarian evokes the restrained ambience and intellectual life of pre-World War Hungary, but I find this atmosphere lacking in George Szirtes’s English version; all languages have their own idioms and means of emphasis, which cannot be replicated in translation. The tone and rhythm of Szirtes’s version is flatter and more detached, suggesting that the translator’s story did not derive from his soul, but was a mere imitation of someone else’s heart-felt experience. Similarly, when translating Latin, it has been challenging to recreate the profound effects of rhythm and meter in Ovid’s poetry. I can now empathise with translators such as Szirtes, and appreciate Ted Hughes’s ‘Tales from Ovid’.

While teaching myself G.C.S.E Arabic at the age of thirteen, I noticed how different it is in construction to the European tongue, for example the non-existent letter ‘p’. This explained why ‘buny’ for carp fish is ‘ponty’ is Hungarian, suggesting that languages have a striking systematic resemblance thus must be derived from a single common ancestor- confirmed by Trask’s ‘Introducing Linguistics.’ If in English we wish to emphasise a word we pronounce it more forcibly. Arabs do the same; hence by doubling the middle syllable we get an intensified meaning. This displays a customary melody of intonation associated with language, as noted in ‘The Talking Ape’ by Burling. Infants grasp an intended message from my tone of speech even when spoken to in a foreign language, amplifying the role of context rather than linguistic knowledge in the transmission of meaning.

Having worked with dyslexic children and currently tutoring ten Latin students, I based my Extended Project on how much of a species’ linguistic development is determined by biology, and how much by cultural exposure. Interestingly, most conversations in English are among people who aren’t native speakers, and through my business at Camden Market and by working for a financial services company, I have found this to be true in a professional as well as a social context. My parents, for example, use the term ‘two towel,’ rather than ‘two towels.’ The correctifier before the noun clarifies for them that it’s plural, demonstrating how language changes with the socio-linguistic reality of how communication is being used. Post-colonial writers depict how Africans reclaimed power through such communicative competence, partially by “turning the oppressor’s language against itself,” as described by Adrienne Rich. My neighbours speak patois, using the accusative ‘me’ instead of the nominative ‘I,’ whereby the use of their vernacular forges a space for alternative cultural production, exemplifying the centrality of the language we use to our social and cultural experience.

The power of language is evident in both the spoken and written word, and at a poetry club I attend, I enjoy the strong instinctive responses this form can give rise to.

My passion for performing is fulfilled through Dynasty Dance, and I have a fascination for visual arts- how emotions can be expressed through dance, colour and image, in comparison to spoken words. An ardent love of reading, travelling and languages has kindled my aspiration to improve my Spanish in Seville and sit the ECL qualification in Hungarian. This privileged access to a range of cultural attitudes offers alternative ways of viewing the world and thinking about life, which I yearn to develop by studying Linguistics.