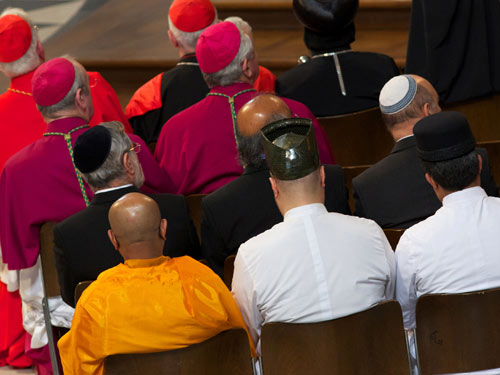 Students in England will be studying two faiths under a new government proposal for a more academically rigorous religious studies GCSE. The aim for the new RS GCSE is to ensure pupils have a greater understanding of the central role of religion on British culture, says the government.

The plans have been welcomed by leaders of major faith groups.

The Department for Education says it has worked with experts from “all the major faith groups” to develop the qualification which is due to be implemented in September 2016. Under the proposals, pupils will study “the beliefs, teachings and sources of wisdom” of at least two religions for the first half of their GCSE. The second half of the syllabus will allow pupils to study one or both in depth: looking at religious practice, religious texts and how faiths tackles philosophical and ethical issues.

The option to study a humanist or non-religious world view will not be included in this list, which caused some criticism from groups including the British Humanist Association and the Religious Education Council (REC) of England and Wales.

Students will not be able to combine Christianity and Catholic Christianity as the proposals state that where a religion is studied from the perspective of a denomination, the second option must be from another principal religion.

The government says “the new GCSE will be broader and more demanding in comparison to the existing GCSE but will still allow faith schools to emphasise their individual teachings”.

“It is of paramount importance that young people understand the central importance of religion in Britain’s cultural heritage and high quality religious education in schools is key to achieving that,” said Mrs Morgan.

“Every major faith group agrees that the current religious studies GCSE fails to do this”.

“That’s why we have developed a new GCSE that, while protecting the right of faith schools to focus primarily on their own religion, will require students to demonstrate knowledge and understanding of the diversity of religious beliefs in Great Britain.”