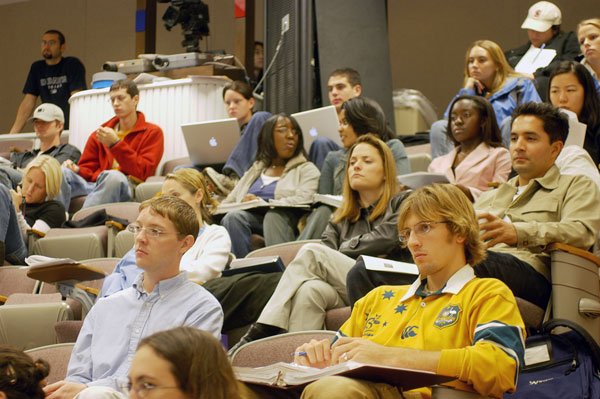 The BMAT admissions test; Those who dare

For the prospective medical student, those bright enough among you who would take it upon yourselves to embark upon such a marathon degree, the choice between medical schools can be a daunting one. The consequences of choices made now may potentially be carried with you for the next 5 or 6 years as well as the rest of your career, a not insignificant proportion of a fledgling academic career. For all prospective students, there are many medical schools across the country to choose from, all fine institutions, producing doctors of the highest standard to work in one of the most effective and democratic medical infrastructures in the world. Whereas all but a select few medical schools opt for the UKCAT as the default admissions test, guarding the entrances to Oxford, Cambridge, University College London and Imperial College London lies the BMAT admissions test. Those who would aspire to those most elite of medical schools will invariably have to start thinking about preparing for the BMAT. Furthermore, while the results of the UKCAT will be available to prospective students at the application stage, the BMAT is taken after the university applications are already made, requiring a leap of faith in applying to these BMAT universities.

While both the UKCAT and BMAT are used as admissions tests for medical schools, they take radically different approaches on how to test you as well as what is being tested, and as such a different approach to preparation that reflects the differing nature of the tests must be taken. The UKCAT is oriented more towards assessing abilities of cognitive reasoning, with 4 test sections concerned with assessing reasoning and analysis and only one test section reserved for the more subjective test of situational judgement. The UKCAT is a test which does not require prior knowledge to complete it, as it is designed to be a test of pure cognitive ability. Despite not testing a level of prior knowledge, it is clearly still possible to prepare for, familiarise yourself with the question types and revise for the UKCAT. The BMAT takes a different approach to the admission test in that it does test levels of prior mathematical and scientific knowledge in one of its three sections. The other two sections include a reasoning section for cognitive ability and an essay writing section to gauge communicative ability. Thus it can be reasoned, that since two of the BMAT’s three sections involve essay writing skills and scientific/mathematical knowledge, the BMAT itself can be prepared for in a manner which is much more organized and objective focused than preparing for a purely cognitive test like the UKCAT.

Whilst a purely cognitive test may prima facie suggest that preparation for such a test would be a fruitless one, it is of course possible to prepare for such question types. Formalizing the thought process to be as efficient as possible in tackling reasoning type questions is one half of the preparation process, with the other half being simple repetition. I would advise applicants to get their hands on as many practice questions as possible and simply complete as many as possible. In doing so you will learn to recognise the patterns of reasoning that are being tested and familiarise yourself with the question format giving you confidence in a stressful exam environment. It is a time consuming process but will hold you in good stead for both the UKCAT and the BMAT.

The second section of the BMAT assesses prior scientific and mathematical knowledge. There is no easy answer on how to prepare for this section as much of it will depend on prior academic performance in the sciences and maths. The only advice I can think to proffer would be to make sure you have a firm command of basic scientific and mathematical principles, and take that knowledge to complete as many past questions and question books as you can.

The final essay writing section of the BMAT may seem a little out of place in an admissions test for a subject so grounded in scientific principles like medicine, but make no mistake, medicine is both a science and an art. While a strong scientific knowledge base is required to practice medicine, the application of such knowledge to real world patients requires skills that transcend pure academia. One of those skills is that of communication. Your communicative skills will be hugely important as a doctor, affecting nearly everything you will come to do, as your working day will invariably involve communicating with various groups of people in all your tasks whether it be handing over patient details to another doctor, explaining pathology to a patient, writing in patient notes to communicate with another doctor who will later read the notes, and liaising with various healthcare professionals as part of a multi-disciplinary team. Regarding the BMAT, the ability to concisely and clearly get across a message within a logical structure is what is being tested. Whilst the first two BMAT sections test cognitive ability and a school careers worth of scientific/mathematical learning, essay writing skills can be learned and improved in a much quicker preparation process compared the first two sections. This is especially true of medical school applicants whose A-level choices will most likely be skewed towards the maths and sciences rather than the humanities. Such students may not be very familiar with such essay writing skills and would benefit most from focused preparation, either through a tutor or another means where feedback on practice essays can be given. Though general advice on essay structure and tips can be learned from books, much of improving essay writing skills really does require constructive feedback. There is no set perfect essay to a given question prompt, rather essays are subjectively judged and as such, subjective feedback during preparation is required.

Though a good BMAT score is important, there are many other factors that will come into play such as prior academic record, the personal statement and the interview. However, medical school places are as selective as they have ever been with just 7515 places offered from 84,395 applications in 2013 and achieving an adequate BMAT score is one hurdle that must be jumped in order to be considered for a place at a BMAT university. The right attitude to serious preparation must be taken in order to stand out with your BMAT score and can immediately give you an edge in the interview selection process. Good luck!